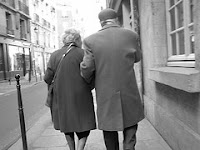 I see the silver-haired couple through the window, walking arm in arm up the street. He has a scruffy grey beard, large eye glasses perched upon his nose, a floppy wide-brimmed hat, the kind favored by grandpas everywhere, today’s newspaper tucked under his left arm. His slightly protruding front teeth enhance the warm smile that glows from within. She is not as thin as she once was. She is wearing a blue and white sweater covered in dancing reindeers and Christmas trees. Her long ponytail spills down her back in a cascade of grace. Her gleaming eye takes in everything with apparent joy and acceptance. Her whole body speaks to the gratitude she feels. It is New Year’s Day.

They are headed to my favorite coffee shop where she orders a green tea, he a plain cup of coffee. He claims the best table, the one by the window bathed in sunshine, while she waits for the drinks and renews a conversation with the lady behind the counter. They talk about the joys of working with people and how lucky they are to know each other through this daily ritual. They wish each other a peaceful New Year.

He waits at the table, his hat now hanging with his beige windbreaker on the back of his chair. He stands to pull out her chair as she approaches with the drinks. He assures himself of her comfort, takes his own seat, and passes her the arts section of the newspaper. I imagine it’s the same every morning. He takes the front page. They sit and sip, sharing the news, chatting briefly, returning to a gentle quiet, exchanging sections and smiles, discussing the day’s events.

I sit at the corner table of the coffee shop, across from this couple, nursing my latte, reflecting on this scene, my first impressions of 2010, and return to my thoughts.

A friend of mine hosted a New Year’s Eve party last night. He said it was as much to celebrate the passing of a tremendously difficult year for so many of us as it was to ring in the New Year. Out with the old, more than in with the new. I know what he means. I am ready to say goodbye to the difficulties of 2009. It was a challenging year. I have been wallowing in self-pity and wandering in a state of confusion and shock. I am ready to turn my back on the last twelve months and to find something new.

I began the New Year rounding up glasses and finding myself up to my elbows in the suds of my friend’s ten quart chili pot. My head spun from one glass too many of Californian bubbly. My stomach complained of too much French cheese and too many bowls of fiery Colorado chili. Tired, discomforted, verging on nauseous, I finished helping my friend clean up from the festivities and headed home to bed.

My New Year officially began ten hours later in a contemplative frame of mind. I am not one for making New Year’s resolutions. January first has never been my New Year. I already have a couple of others that work better for me.

Springtime. The earth is re-born. I shake off the winter blues and turn my head to the sun. My markers are the first daffodils blooming, new buds on the maple outside my window, the first bike rides of the season. It’s the most exciting time of the year. New life, new beginnings, new hope. Endless possibility.

My second New Year is the first day back to school. I’ve celebrated more than twenty of them as an elementary school teacher. A freshly painted classroom, empty walls, blank writing notebooks, fresh faces, new clothes. A year of discovery ahead of us. I turn to my eager young charges and feel the privilege of embarking on this journey alongside them. New beginnings, new hope. Endless possibility.

I don’t feel the need for a third New Year, this one on January first, but here it is. The calendar tells me so. A whole other decade. 2010. Short days and dark, cold evenings. Snow remaining firmly on the Colorado ground. Freezing temperatures. Nothing growing. It’s just another Friday morning as I woke up in an emotional frame of mind. Yet, this year is different.

I am not one for making New Year’s resolutions, but some friends have been pestering me about it. They think I should. They think it will be beneficial for me. They think that setting good intentions here in mid-winter will bring me good things. They don’t understand that this isn’t my season. I’ve already got my time for new beginnings. A cold, hungover morning, slap in the middle of Christmas break, isn’t it.

I stretched my way out of bed and tumbled into a hot shower. Scrubbing away the last vestiges of the post-party blues, my mood began to lighten. I had a day in front of me with no commitments. Nowhere to be, no one to tend to. The day is a gift. I decided to spend a good portion of it writing. There was an essay about the landscape of my childhood that had been on my mind. I had been waiting for some time to explore it. Here was my chance. I got dressed and headed out to the coffeeshop.

I set up my computer at the corner table with a great view of the street. I like to see the world go by as I write. I ordered my latte and begin to take notes in my soft, green, leather-bound journal. A few minutes into my work, my eye was caught by the elderly couple wandering my way.

I watch them, fascinated, unwilling to get back to work. I make up stories: they have just celebrated their fiftieth wedding anniversary and are spending their golden years visiting grandchildren and great-grandchildren around the country; they set the alarm at 11:55 last night to get up and wish each other a joyous New Year and then fell back to sleep; they were childhood sweethearts, reunited after the tragic loss of their first spouses; she has vowed to spend his last weeks with him, her neighbor of thirty years, as he succumbs to a terminal illness. I lose myself in the reverie of my imagination.

After forty minutes or so, they fold up their paper, return their empty cups to the counter, gather up their coats and return outside. Arm in arm, they stroll around the corner, out of my view, and into the New Year.
More than anything, I notice the pleasure this pair derives from each other, from their surroundings, from what I imagine is a daily routine. So simple, yet so meaningful. I notice the gratitude, I notice the comfort, and I notice the love.

And I realize something. This is what I want too. I want to head into my last years with the same look on my face, the same warmth of familiarity, finding the same simple pleasures, the same gratitude. I want to create that for myself, make it happen.

It is New Year’s Day, and I believe I have found a resolution.
Posted by Steve de Beer

Love this. Thank you for sharing. Knowing this intention for you.