The End of the World, Argo, and Those Two Old F**ks from The Muppets 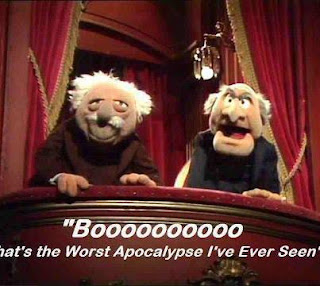 Turns out the Mayans were wrong.  Maybe they did just run out of space on their stone calendar, or maybe we were just reading it upside down, as various cartoons circulating on the internet suggest. The world is still here. 2012 is wrapping up and 2013 is right around the corner.

Last night Steph and I went to see Ben Affleck’s movie Argo.  It’s a great film.  I’m not usually partial to espionage thrillers, preferring happy escapism to edge-of-my-seat drama, but this was one that I enjoyed. The witty one-liners offered up by the Hollywood characters played by Alan Arkin and John Goodman help break up the tension.  My favorite line was delivered by the CIA higher-up portrayed by Bryan Cranston.  When Affleck’s character is about to enter a meeting with Secretary of State Cyrus Vance and an adviser, Cranston warns that it’ll be “like talking to those two old fucks from The Muppets.”  Which of course reminds me of another internet meme doing the rounds on the subject of the Mayan prediction of the end of the world.  Booo!

Yet, what kind of world have we created at the end of 2012?  It has not been easy by any stretch. I know far too many people who have lost loved ones this year.  Many unexpectedly or too early.  Too many others who have been diagnosed with scary illnesses.

There have been too many headline-grabbing violent crimes, too close to home.  Sandy Hook Elementary, Newtown and Batman: The Dark Knight Rises, Aurora are names that will live in infamy following 2012.  Devastating natural disasters, made undeniably worse by man’s ineptitude, left so many destitute; western wildfires, particularly the Waldo Canyon and High Park fires here in Colorado and Hurricane Sandy on the east coast; overseas, horrific violence claimed the lives of too many innocents in Egypt, Libya, Syria and across the globe.

In Washington, ridiculous politics and ridiculous money fueled an election that everyone was glad to put behind us. And yet, really, what has changed as obstinate party leaders on both sides refuse to come to an agreement and are about to launch the country off the so-called fiscal cliff and back into recession, preferring to stick to their own hard-headed principles than do what’s best for the rest of us?

Has 2012 truly been any worse than any other year?

If the 26 victims, 20 of them young children, who were murdered in Newtown, Connecticut just two weeks ago lead this country to tackle the massive problems caused by negligent gun laws and disregard for the mentally ill, that will be a step forward.  If a newly re-elected and invigorated president can persuade a congress to do what’s best for the common man, instead of big-money corporations, that will be a step in the right direction.  If the will of the people can overcome the self-centeredness of the NRA or other special interest groups, we will move forward as a nation.

Will the devastating events at the end of 2012 finally cause us to wake up and face the hard questions? Or will things have to still get worse before they get better?

What is our break point? 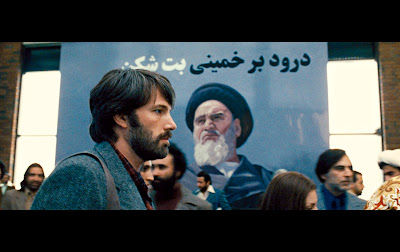 The true story told in Argo is one of incredible individual risk-taking and massive inter-governmental cooperation.  A CIA agent risks his own life and flies into revolutionary Iran in order to rescue six American diplomats who are stranded in the home of the Canadian Ambassador’s house in Tehran.  It is only through unprecedented collaboration between the White House, the CIA, the U.S. State Department and the government of Canada that he can possibly succeed.  And it is only because of his incredible bravery and putting his own neck on the line that he does succeed.

This is what it will take for us all to succeed in 2013.  Courageous individuals who take a stand and get the full backing of the power of the people.  Leaders who are willing to put their own necks on the line and say enough is enough.  Common people who will make their voices heard in such numbers that we cannot be ignored.  Common sense over self-centeredness. The will of the people over the will of the few.

The Mayans have given us a second chance.  In the words of Five for Fighting’s World:

“What kind of world do you want?
Think anything.
Let's start at the start.
Build a masterpiece.
Be careful what you wish for,
History starts now….”

It is time to set aside happy escapism and to get real.  It’s time to build a masterpiece. Sign me up.
Posted by Steve de Beer 3 comments:

The Safeguard of Democracy 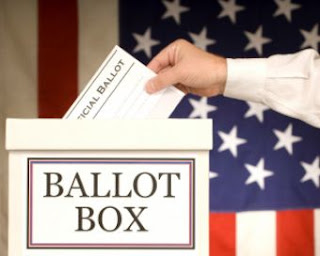 Last month, I cast my first ever vote for President of the United States.  In January 2011, after twenty years as a permanent resident, I became a citizen of the U.S.  This was not a decision I took lightly. It was not an easy thing to turn my back on the United Kingdom, where I had grown up, received a college degree, and where my family still lives.

However, influencing my decision more than perhaps any other factor was the importance of my right to vote. As a nineteen year old at the University of York in the U.K., I voted in a general election for the first time.  For a few years after I moved to Colorado, I voted in British elections from afar, but there seemed something disingenuous about having a say in a place where I neither lived nor paid taxes.

Finally, after far too long, and after acing the citizenship test that twenty years of teaching fifth grade American history and geography had so graciously prepared me for (one of the questions they asked me was “Which ocean is off the west coast of the United States?”), I found myself in the suburban offices of the U.S. Citizenship and Immigration Services in Centennial, Colorado.  In a meaningful and surprisingly emotional ceremony, I stood up with seventy five brand new Americans of every stripe, from thirty six different countries, and swore allegiance to this country.  One of the vows I promised to myself was never to miss out on the right and the privilege to vote.

It is perhaps the most important act that we can perform as a citizen. 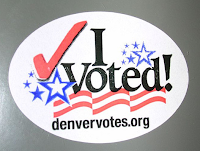 The role of good citizenship is something I have been proud to teach my students over the years.  In the words of our newly re-elected President in his victory speech in the early hours of the morning following the election, “What makes America exceptional are the bonds that hold together the most diverse nation on earth. The belief that our destiny is shared; that this country only works when we accept certain obligations to one another and to future generations. The freedom which so many Americans have fought for and died for come with responsibilities as well as rights. And among those are love and charity and duty and patriotism.” To that I would add showing up fully, pursuing a quality education, learning to manage conflict, and showing respect to all.
When the elementary students at Friends’  School in Boulder took to their own polls in the school’s library on Election Day, the teachers urged them to show respect for each other and for divergent viewpoints.
In a note I received from one of the parents, “it is imperative that we show our children how many things connect us rather than the things that separate us. To show the children that respect for each other is more important than the issues that we think divide us. In a nutshell, we as a school must seek to be the change we want to see in the world.”
I couldn’t agree more. Those are among my school’s strongest values.  It is part of our mission: “Our students acquire a strong academic foundation while developing creative expression, social responsibility, and respect for diversity and the individual”.
It’s what I signed up for when I arrived at Friends’ School and when I raised my right hand and took the oath of citizenship as a United States citizen.
President Franklin Delano Roosevelt once said, “Democracy cannot succeed unless those who express their choice are prepared to choose wisely. The real safeguard of democracy, therefore, is education.”
It’s good to be here. It’s good to be in education.  It’s good to be able to choose wisely.
It’s good to have a voice.