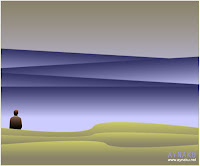 April 1975. Summer term at a traditional English boarding school. A former mansion, tucked away into the thick woodlands of the southeast. The greystone edifice perched atop a hill casting a foreboding eye on all it sees. A small and sensitive seven year old is left for the first time at the grand front portal as his parents, young and unknowing in the ways of child development, drive away. He would see them every other weekend while school was in session - for the next eleven years. He is trying hard not to let others see the fear and hurt in his eyes.

It is a school where rote learning is standard; where good study habits mean copying pages off the board verbatim; where the art teacher gets angry if the boy doesn’t do it her way; where he is told to stand facing the wall for two hours after getting caught talking after lights out; where he must wear shorts even on the most biting of winter days; where no one knows his first name, only his last; where bullying is regarded as an acceptable form of character building; where missing chapel results in a beating; where untrained teachers rely on the pedagogy of their own post-war school experiences. The small and sensitive seven year old has no opportunity to find out who he is. He simply hides himself away.

That same April 1975. Seven thousand miles away, at a small school attached to Montview Church in Denver, Colorado. A teacher, trained in that same post-war England, is watching and listening to children. They are just returning from spring break. The sun warms their faces. All around her there is joy and laughter. A few of the children are seven, small, and sensitive.

These children, however, are painting glorious pictures; they are pouring water and digging in the sand; they are reading and writing - anything they want; they are sewing, building and gluing; they are playing dress-up and make-believe; they are learning math with blocks and color; they are learning how to give and take and share; they are celebrating each other’s successes; they are hugging and being hugged. The English woman does everything in her power to help these seven year olds find out who they are. And they sparkle.

The teacher’s name is Carolyn. She has recently arrived in Colorado, from England, with a young family of her own. She is in the process, although she doesn’t know it at present, of founding a school that would later grow into a beloved institution, educating thousands of children. All of them touched personally by her strong principles, her guiding hand, and her love.

The boy’s first name is Steve. Me.

Everyone calls me that now, even my students.

Fifteen years after those humble beginnings, I stumbled upon Carolyn’s school. She hired me and I have learned. I have been a teacher and theatre director here for almost twenty years, the length of a childhood. Her school, now known as the Stanley British Primary School, has taught me well.

I invite you to walk into my classroom. I am proud of the joy to be found. Children feel safe, knowing there are clearly defined limits and high expectations. They are free to be themselves, to explore while learning, and to find success. They are encouraged to take risks and they are guided as they learn from their mistakes. We work together to find out more each day about what kind of learners they are. They learn to articulate their strengths and they work to strengthen their weaknesses. They know they can make a positive difference in numerous ways. They are supported, trusted and loved. They are on the pathway to discover who they are.

I think of John, a third grader who has been diagnosed with a severe form of dyslexia. Reading is an immense struggle, as he meets familiar words for the first time again and again and again. His writing is almost impossible to read. Letters are misshapen or reversed. He occasionally forms entire sentences in mirror image from right to left. Expressing himself on paper is the hardest thing anyone has ever asked him to do.

The class is studying pre-Revolutionary War America. One group decides to make a dramatic presentation of the events surrounding the Boston Tea Party. John is one of the kids volunteering to play the part of Sam Adams. This needs to be improvised. They have been given ten minutes to produce a skit. There is no time for further study. To my surprise, his peers pick John for the role. I am unsure of what he knows. The kids know better.

With barely any practice, John gives a fluent and knowledgeable oration, recounting all the reasons that taxation without representation is unjust, why the tea on the ships floating out in Boston Harbor represents all that the colonists found so wrong with British rule, and what steps the American militia should take to unseat the occupational forces. It is an extraordinary moment. John has since gone on to star in theater in high school. Learning lines is still hard for him, but he has figured out that if he records his part and plays it back, he can memorize without too much trouble. He knows who he is as a learner.

My classroom is a place where parents feel welcome, included and appreciated, where they are free to give opinions, ask questions and participate fully in the education of their child. Their questions are answered honestly. Knowledge about child development is dispensed freely and without judgment.

I think of Lisa, the parent of an only child, a librarian by training. She grew up in San Francisco with a deep-seated phobia of math and no confidence in her mathematic ability. She mentions to me that she is struggling to help her daughter with her homework on subtraction and borrowing. She knows how to do it, just not how to explain it. She and I spend a delightful hour, one afternoon after school, playing with base ten blocks, looking at subtraction from various conceptual angles, and talking about the differences in experience and learning style between herself and her daughter. Homework now breathes more easily in Lisa’s house.

I invite you to come to a play rehearsal or to see children performing in one of my productions. Anywhere from thirty to one hundred and thirty kids working in harmony towards a common goal. As in the classroom, I am proud of the joy dancing through the theatre. Children are encouraged to reach outside their comfort zone, to strive for something they did not know they had inside them. Humour and delight abound.

I think of Katie who, a few short years ago, squeaked out a couple of barely audible lines in Peter Pan. She later starred in a major role as Alice in Wonderland, to rave reviews. I think of Will, who in the past has lacked confidence and brought a slight awkwardness to social situations. He recently played the lead, all 400 lines of it, as Sheridan Whiteside, the outlandish curmudgeon, in The Man Who Came To Dinner, and emerged as a true leader among the cast.

There is a unique spirit at Carolyn’s school. It recently hosted a statewide meeting of independent schools heads. Administrators from some of the finest schools in Colorado entered the front lobby of the school and the reaction was universal: “There is such a feeling of warmth.” Later, they toured our campus. More comments were heard: “What a delightful place this is; how happy the children are; look how the children’s work is everywhere; there is such a relaxed atmosphere; the campus is beautiful; the students are so comfortable in their environment; there is a spirit here I haven’t experienced elsewhere.”

I am overjoyed to have been a part of growing that spirit. Yet, more importantly, I am overjoyed at how the school has been part of my growing spirit.

It has taught me how to watch and listen to children. It has taught me what a joyful place school can be. It has shown me that the process is more important than the product. It has helped me understand what it means to be a lifelong learner. It has surrounded me with color and creativity, laughter and friendships.

While my formal schooling in England taught me dates and facts, Latin and Greek, competition and one-upmanship, there was so much I did not learn. I never learned about support, justice, cooperation or trust. I never learned joy, gratitude or love. I never learned the importance of play. I have learned these things at the Stanley British Primary School. I have learned them from Carolyn, from colleagues, and from parents. But most of all, I have learned them from the children. I watch them and listen to them and they teach me. Every one of them. My first class of five year olds as an intern twenty years ago, my current class of third, fourth and fifth graders, and the middle and high schoolers, many of them former students, whom I direct in theatrical productions at the school each summer.

I now know that I did not stumble upon Carolyn’s school. I was guided here for a reason. Within this safe, warm and inviting space, I have at last experienced everything that Carolyn’s kids were participating in, and that I was missing out on, all those years ago. This school has quite simply allowed me to experience my childhood.

It has brought me out of hiding.

I have finally discovered who I am.
Posted by Steve de Beer

Wow! Steve, what a profound essay. As I read it, you make me want to be a better teacher. I think about all the things we are trying to "make our kids into" in the public school system. Your dyslexic child reminds me of one of my second graders, whom I see amazing potential in his voice and ability to express himself with his body!

incredible, Steve. And inspiring. Thank you for sharing! I am still looking ;-) Stacey

How profound, Steve. Joyfulness and Happiness are often clouded by feelings of unworthiness. Being able to overcome our many varied childhood experiences to embrace love, joy and intimacy is difficult at best. Watching my children experience such joy and love in their learning affirms what I do know: love, joy and happiness is there for the taking. Liz F.