More Tales From the Art World - When Dreams Come True

My Tales From the Art World essay, posted last November, is rising up on the list of most viewed entries on this site. Who knows if it was the surreal nature of the stories that piqued interest of readers or the question of whether life imitates art (or is it the other way around)?

Since then, I’ve noticed many more fascinating stories from the art world rapping on the knocker of my attention.  Foremost among them is the story of the once homeless David Choe who, with this week’s announcement of the impending initial public offering of Facebook, is set to make a tidy $200 million.  I was also fascinated to learn of an artist in Italy who’s taken the concept of building green to a whole new level.  I love this stuff.
Spray-Paint Artist on Verge of Becoming a Multi-Millionaire
A long time ago in a galaxy far, far away... .in the social media dark ages of 2005, a young company called Facebook was barely a year old.  Membership was only open to college and high school students, and its founders wanted to spruce up its first offices in Palo Alto.  Then-president Sean Parker hired a 28 year old Korean-American graffiti artist by the name of David Choe to jazz up the office walls with an erotic mural or two.
When the work was finished, Parker offered Choe the option of cash or shares in the start-up.  The temptation for a young struggling artist to be paid in real money was high.  Even though he is reported at the time to have said that the very idea of a social network was “ridiculous and pointless,” Choe wisely chose the stock option.  He was listed as an ‘adviser’ to Facebook and received 0.1 to 0.25 percent of the company.  If Facebook does as well as is expected in its IPO in the spring, that share could be worth up to $200 million.
Not too shabby.
Since that initial mural was completed, Choe has had rising and falling fortunes.  He has been homeless and he also has a painting of Barack Obama that hangs in the White House.  He has been re-hired by the Facebook team to paint two sets of new offices, and his original works in the Palo Alto offices, no longer inhabited by Facebook, have been carefully removed and shipped to various Facebook offices worldwide.
Choe's pay for that original mural could be worth more money than Sotheby's raised for its record-breaking $200.7 million sale for a collection of work by artist Damien Hirst. On his blog, Choe reflects on his good fortune, or perhaps his destiny, as the rags to riches story of the century so far:
"Have you had the dream where you ARE this guy?!? And then some kind of happy accident happens, and as you're in the middle of this glorious car crash, you stop to realize, that there is actually no such thing as an accident, and no chance encounters, and that everything has a direct purpose?"
Yes, I’ve had that dream.  Have you?
Taking Built-Green to a Whole New Level
In the Alpine hills of the Lombardy region of northern Italy, outside the town of Bergamo about 40 kilometers northeast of Milano, local artist Giuliano Mauri has created a stunning display of natural architecture – an entire cathedral made only out of trees.  Designing his cathedral in 2001, Mauri envisioned a unique organic building designed in such a way that the branches of the trees forming its pillars would extend and arch to become its roof and walls.
The frame of the tree cathedral of Bergamo, or as Mauri called it “La Cattedrale Vegetale" consists of 42 columns made with spruce trunks and branches of chestnuts and hazelnuts forming supporting structures around the young firs. The 42 columns constitute a basilica of five aisles. With time, they will grow stronger and the wooden structures will slowly wither away and eventually be dismantled, offering a seamless transition from a man-made structure to a completely natural creation. 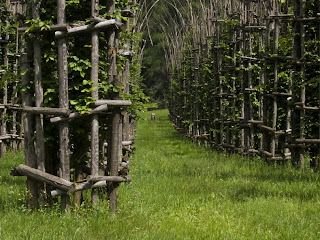 “La Cattedrale” is more than 90 feet long, nearly 80 feet wide, and ranges in height from about 16 feet to nearly 70 feet. The project makes use of 1,800 spruce trunks and 600 chestnut tree branches which are bound together by over 6,000 meters of hazelnut twigs, utilizing local traditional methods of intertwining and weaving. As the beeches grow they will form a natural roof across the Cathedral.
Mauri unexpectedly passed away in 2009, and the artist never got to see his grand plan come to life.  However as an homage to his life’s work, the project was initiated in 2010, the International Year of Biodiversity, and is well on its way to fruition.
Posted by Steve de Beer