The Americans Fight Back 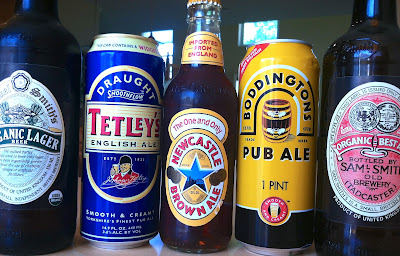 A couple of months ago on this site, I posted an Open Letter to All Americans on the Subject of Beer and lovingly signed it from your friends, the British.  While it was completely tongue-in-cheek and chock full of untruths and assumptions, I was pleased that it elicited a few chuckles from my readers on both sides of the pond.

The best reaction of all was from a small group of American beer lovers, most notably my partner Steph and our friend Rita, who decided to fight back.

They organized a beer tasting event at my house.  I was to provide a sampling of the finest British beer (subject to availability on these shores) and friends were invited to bring along their favorite non-British beer, American preferred, but alternative nationalities accepted.

Game on!  On this final weekend of the London Olympics, let the tasting begin.

Representing Her Majesty’s people of the United Kingdom of Great Britain and Northern Ireland, as procured from the import section of the off-licence (as we Brits like to call our liquor stores) near my house, some of my favorites - see picture above.  Mostly ales, some organic, the assembled crowd agreed that these were frightfully jolly good brews, created in the northern climes of England: Sam Smiths, Boddingtons, Tetley’s, and Newcastle Brown. 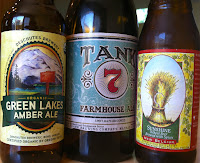 Representing a few of the smaller breweries of the United States, here we have beers from Deschutes Brewery in Oregon, New Belgium Brewing in Colorado, and Boulevard Brewing in Kansas City, Missouri.  Mighty fine beers all, and evidence of the grand improvements made in American brewing over the last twenty years.  Not a bad one among the bunch.  Well done, Americans!

Rounding up the pack, a few friends brought beers from the Euro Zone (let’s all say Euro Zone while we still can, eh?) from Belgium and from Bavaria in Germany.  All three came from breweries that had their humble origins in the monasteries and abbeys of the dark ages.  Despite the fairly safe assumptions that the goodly monks and friars didn’t wash their hands and had relatively filthy habits, these beers went down smoothly and were enjoyed by all.

And then there was James.

Somebody had to invite James.  James too, it is told, enjoyed a few laughs at my Open Letter. The great wag that he is, James decided to stop by his local convenience store and contribute the following to the beer tasting event: Miller, Coors, Budweiser.  Please note (as highlighted in my original post) the spelling of Lite and the on-the-can indicator of whether the beer is merely cold or super cold (whatever that is).  Not surprisingly, most of these beers went unopened during the event. 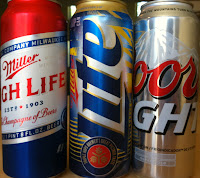 (Note, if anyone wants free “beer” and is willing to cart off these heinous 24 fl. oz. cans that are currently taking up valuable space in my refrigerator, let me know – first come, first served!)

James’ pièce de resistance was a delightful little number, whose very existence I was joyfully oblivious to, until it showed up in James’ shopping bag, accompanied by a gleeful cheesy American grin on his face.  Ladies and gentlemen, I present to you, I kid you not, Bud Light & Clamato.  For those of you as blissfully uninitiated as I was, Clamato is tomato juice mixed with clam broth and unnamed spices.  Not quite believing what I was seeing, I later stopped by the Clamato website, whereupon I was duly informed that….

”using a top-secret process for mollusk reanimation, our engineers add a small amount of clam broth at just the right moment to give Clamato its unique taste.”

This is what happens, people, when an entire nation is left to its own devices without proper grown-up supervision.  A small minority spoils it for everyone.  They mix shellfish with fruit (or is a tomato a vegetable?) If that is not bad enough, they mix that concoction with beer.  And, it must be asked, what the hell is “mollusk reanimation”? 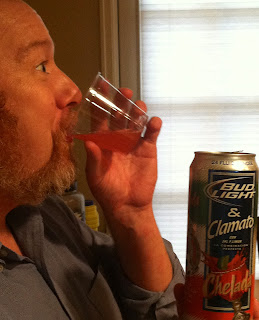 This is a picture of James drinking Bud Light & Clamato.  Natural consequences if ever there were any.  Needless to say, in our informal poll, this vile hybrid came in last place.

The winners were as follows:

Proving conclusively that, while American beer should be commended for trying hard and for most improved, the remaining skeletons in the closet cannot be ignored - and British beer still comes out on top.

Author's note: Despite his faults, James is to be commended on two levels: firstly, for putting his mouth where his money is and drinking most of the whole can of Bud Light & Clamato; secondly, for his excellent taste in girlfriend - the lovely Bernadette brought us delicious peaches from her garden which made it all better.
Posted by Steve de Beer