Confessions Of A Reluctant Artist 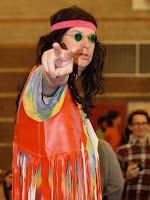 A few summers ago, I was strolling through the Cherry Creek Arts Festival in Denver admiring the incredible talent on display. Artists from around the country exhibited the most wonderful creations. In particular I remember a painter who created a giant likeness of Bob Marley with his hands, in sync with Marley’s music. That same summer, I heard my friends Barbara and Paul play violin with the Colorado Chamber Players and saw my buddy and mentor, Jamie Horton, portray Uncle Vanya on the professional stage. Artists, all of them; and I was envious.

How were these people so talented and I was not? I have vivid memories of sitting in art class, at age eight or nine, and being told that my drawings were below par. I struggled through clarinet lessons and found it hard to tell whether the next note was higher or lower than the previous one. I couldn’t dance. My stories were boring. I was so shy I never dreamt of trying out for the school play. I was asked to be the prompter once but I fell asleep halfway through the show. Yet I knew which of my friends were artists - the singers, the painters, the actors, the piano players, the poets - and I admired them. There were a few things I was good at – I played fullback on the rugby team and I could conjugate French verbs with the best of them – but an artist I was not.

And then a funny thing happened. I moved 7,000 miles away from my home in England and found a place called the Stanley British Primary School. I watched the children. They painted pictures, glorious pictures. They sang and danced, all of them, every week. They played dress-up in their classrooms and put on plays for each other. They wrote amazing stories. They sewed and built and glued. And most importantly, they were celebrated.

Teachers created safe, warm and inviting spaces where art could flourish. Everybody’s work was up on the wall. Everybody’s. All students, kindergartners through fifth graders, got up on stage for the musicals. And if more than a few people wanted to be Peter Pan, or Annie, or Dorothy, then there were more than a few. Nobody was told they couldn’t do it, so everybody did. “Be yourself; take risks; explore; learn from your mistakes; create; turn it into something else; play; go for it!” These are the messages the children heard all those years ago and they are the same messages my own daughters hear at the school today. And my children create. They know they have the freedom to make art and music and dance, wonderfully.

And here’s the thing: I don’t even know if they have more or less talent than I did at their age. It doesn’t matter because they believe they have. That’s what matters. Sure, they have days when the painting or the building is not going to plan, days when they are their own worst critics. But I still believe in them. So does their mother and so do their teachers. My seven-year old has informed me that, when she grows up, she is going to be a book illustrator and author, a concert pianist, a horse trainer, a teacher, and an artist – all at the same time. And I say, “Why not?”


As for me, I once got to help out in one of those plays with seven Dorothys. The next year, I got to help out some more and I soon found myself directing short sketches. A passion for the theater was born. Now I adapt and direct plays for children and I have learned something about myself. I may still have two left feet, I still don’t know which note is higher, I still draw stick figures, but I am an artist. And I will never again fall asleep during the show.