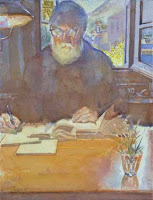 For me, growing up in southern England in the 1970s, my heroes were the stars of the Arsenal football team as they made their historic title runs – Brady, Macdonald, and others. Action shot posters covered my bedroom walls. In my early twenties, as college opened my eyes politically, I read voraciously the works of those fighting apartheid: Gordimer, Woods, Coetzee, Malan, Mphahlele, Paton. I met a couple of them – Donald Woods when he came to speak at my university and Es’kia Mphahlele when I taught his grandsons in Denver. I remember celebrating the release of Nelson Mandela in February 1990 as I had celebrated a few months before the last-minute goal for Arsenal which brought home the English championship. As we grow and change, so do our heroes.

I recently had the great honor of meeting my latest hero. A gentle and wise man in his seventies, he looks a lot like the Father Christmas of my childhood. He is blessed with a full head of white hair, a downy beard, a portly profile, a warm smile, and a bountiful heart. A storyteller, a gifted writer who describes the world as I wish to see it. For him it is a place of goodness and laughter, and generosity of spirit. He is quite possibly the single most influential voice in my own writing.

Robert Fulghum may still be best known for the essay that propelled him into the public eye - All I Need to Know I Learned in Kindergarten. It remains a wonderful philosophy by which to live. He has since written eight best-selling books. A former cowboy, minister, and teacher, Fulghum now divides his time between Moab, Utah, Seattle, Washington, and the Greek island of Crete. Lucky fellow.

He also travels for speaking engagements where, last month in Lakewood, Colorado, I was fortunate to hear him reflect on his latest musings, share some wonderful new stories, and re-tell some old favorites. I especially enjoyed the one about Norman, the little boy who single-mindedly decided he was going to be the pig in the play of Cinderella. His wise and experienced teacher allowed him free reign and Norman stole the show. During the course of the evening, Fulghum had his listeners laughing and crying; he snapped a photograph of the audience – to inspire him during the lonely moments of the writing life; he even had us singing the words to Itsy Bitsy Spider to the tune of Beethoven’s Ninth. A delightful couple of hours.

Most memorable and inspiring was the opportunity to meet the author following his talk. The usual line of book buyers and autograph seekers formed in the back of the hall. I too joined the line. I had no clue what to say to the man who was expecting to sign a copy of his latest book. What could I say to someone I knew so well, through his reflective writing, yet not at all?

As the line in front of me got progressively shorter, I had a brief moment of star-struck panic. I am a sensible, even-keeled schoolteacher in my early forties. Fulghum is a self-described old geezer, a moderately well-known author who writes about the everyday. This was not the latest pop sensation confronted by hordes of adoring fans. I wondered about buying one of his books to give myself a prop, something to talk with him about, but I owned all the titles for sale that night. Now second in line, I worried that I would be speechless, or worse, mumble something inane.

My turn came. The author reached out to sign the book I hadn’t bought. He looked up at me. “I’m Steve,” I said, as calmly as I could. “Nice to meet you, Mr Fulghum.”

“Nice to meet you too, Steve,” the baritone voice of wisdom responded. Well, that didn’t buy me a lot of thinking time. A pause, enough time to tell my hero the only thing that really mattered. “Thank you.” I briefly told him that I was a teacher and a director of children’s theater, that I too had encouraged my own Normans to find their place in the limelight. And I thanked him for his incredible body of work and for being the writer with the most influence over my recent commitment to write and my decision to publish my work online.

Fulghum’s response? He reached his hand over the desk to shake my hand, to thank me for doing what I do, for inspiring children, and for pursuing my art. I was honored and touched by his gesture and his words. The renowned author, who had just spoken to hundreds, whose books have sold in the millions, wanted to shake my hand? It was the response of a humble and gracious man.

Mr Fulghum, I hope you have an opportunity to read this one day. You made my day and gave me further encouragement to follow my passion. For that, you are my hero.

What a fantastic oportunity, ne you'll remember for a long time.