A Modern Twist on an Old Poem 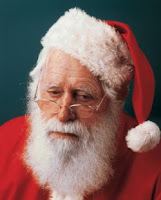 Following my annual reading at Stanley BPS's Holiday Program, December 17, 2010, many people asked to see a copy of the poem. It is not mine, but something I found online and then adapted for this audience. It was originally written by Harvey Ehrlich. About 20% of it is mine. I have no idea who old Harvey is, but all credit should go to him.


‘Twas The Night Before Christmas And Santa’s A Wreck


‘Twas the night before Christmas and Santa’s a wreck.
How to live in a world that’s politically correct?
His workers no longer would answer to “Elves”
“Vertically challenged” they were calling themselves.
And labour conditions at the North Pole
Were alleged by the union to stifle the soul.

Four reindeer had vanished without much propriety,
Released to the wilds by the Humane Society.
And equal employment had made it quite clear
That Santa had better not use just reindeer.
So Dancer and Donner, Comet and Cupid,
Were replaced by four pigs, and you know that looked stupid.

The runners had been removed from his sleigh;
The ruts were termed dangerous by the E.P.A.
And people had started to call for the cops
When they heard heavy footsteps upon their rooftops.
The people at PETA were all up in arms,
His fur trimmed red suit had caused animals harm

If that wasn’t enough, to add to his woes
Rudolf was suing over unauthorized use of his nose
And had gone on The View, in front of the nation
Demanding millions in fair compensation
And as for the gifts, why, he’d never a notion
That making a choice could cause such commotion

No candy or anything bad for the tooth
Nothing that seemed to embellish the truth.
And fairy tales, while not yet forbidden,
Were like Ken and Barbie, better off hidden
No video games that could ruin the eyes,
No iPods, iPads, iPhones, nothing with ‘i’s.

No baseball, no football, where kids could get hurt
Besides, playing sports exposed them to dirt
Dolls were said to be sexist, and should be passé
Computers would just rot your whole brain away.
So Santa just stood there, disheveled, perplexed,
He just could not figure what to do next.

He tried to be merry, tried to be gay,
But you’ve got to be careful with that word today.
His sack was quite empty, limp to the ground,
Nothing acceptable was to be found.
Something special was needed, a gift that he might
Give to all without angering the left or the right.

A gift that would satisfy with no indecision,
Each group of people, every religion,
Every ethnicity, every orientation
Everyone, everywhere…the whole population.
So here is the gift, it’s priced beyond worth,
May you and your loved ones enjoy peace on earth

Whatever your thing at this season of light
Hanukkah, Kwanzaa, Mary Jo’s Starry Night,
Festivus, Christmas, Solstice, Diwali
We wish you great joy at your winter party
From our Stanley teachers and all of our crew
We’re wishing great joy to your family and you.
Posted by Steve de Beer