Tales from the Art World: Decadence, Oscar Wilde, and Wal-Mart

The old adage asserts that life imitates art.  Three separate stories from the art world crept onto my radar this week, all of which highlighted the tremendous irony in that axiom. Does art imitate life – do artists attempt to re-create whatever they perceive in their conscious or unconscious worlds – or does life imitate art?
The great wit Oscar Wilde wrote that the concept of life imitating art “results not merely from Life's imitative instinct, but from the fact that the self-conscious aim of Life is to find expression, and that Art offers it certain beautiful forms through which it may realize that energy.”
Let’s explore.
Story #1:  $1,000,000 Artwork Damaged by Cleaner 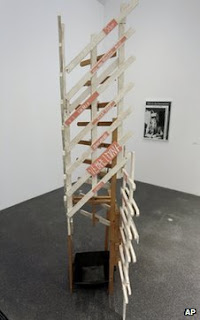 An art installation, housed in Dortmund, Germany’s Ostwall Museum, valued at over a million dollars, was damaged by an overzealous cleaner who scrubbed away at a deliberate patina.  Artist Martin Kippenberger's “When It Starts Dripping From the Ceiling” remains on display in the museum, where the damage occurred.  The patina was meant to look like a puddle beneath a rubber trough placed under a stacked tower of wooden slats.  The private collector who owns the installation has agreed that it remain on display despite the incident.  The cleaner, who had been instructed to steer clear of the piece by at least 8 inches, must have thought she knew better. I can imagine her thinking “Mein Gott, I know dirt ven I see it, and it must be obliterated.”
Needless to say, the work no longer resembles its title’s claim.  I have to wonder who would value a puddle of patina and accompanying erection of rubber and sticks at over a million U.S. dollars and what is it worth now without the all-important pool of goop?
Story #2: France Bans British Owned Painting from Leaving the Country 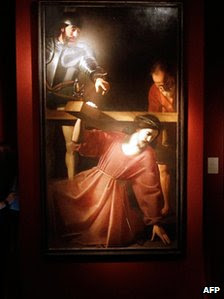 French master Nicolas Tournier painted his “The Carrying of the Cross” in 1632.  It once hung in a chapel in Toulouse in the south of France, but it went missing during the French Revolution. Its location, even its very existence, remained unknown for almost 200 years - until two years ago when it showed up in Florence, Italy during the sale of an estate of an art collector.  It was bought for 400,000 euros by the Weiss Gallery of London.  The Gallery brought the painting to Paris in a goodwill gesture, to an art show for old Masters. But the French Culture Ministry is demanding the return of this long-lost work of art and is refusing to let it out of France. "This was the property of the French state that was deposited at the Augustins Museum in Toulouse and was stolen in 1818. It is a non-transferable work," the ministry said in a statement.  They added, "We are claiming this painting as the property of the state and it will not leave the country,"
It brings up reminders of not only the ongoing squabbles about the Elgin Marbles of the Acropolis, but centuries of animosity between the English and the French.  For me it raises questions. Did the French government have a perfectly good opportunity to buy the painting fair and square at auction, and could they afford it? Do they have jurisdiction over a legal sale outside of France (the painting was actually bought by the English from an Italian at an art auction in the Netherlands)? Why are the French perpetually petty around issues of culture?  Didn’t they leap into the economic and monetary union of the EU with both feet?  Shall we examine how that is working out?
Let it be.
Story #3:  Wal-Mart Heiress Brings Art Museum to the Ozarks
Yes, Bentonville, Arkansas to be exact, the birthplace of the giant discount store chain.  In what critics are calling the biggest event in decades on the American art scene, the Crystal Bridges Museum of American Art opened this week to great acclaim. The art world is in no doubt that Crystal Bridges houses one of the most important and impressive collections in the country. 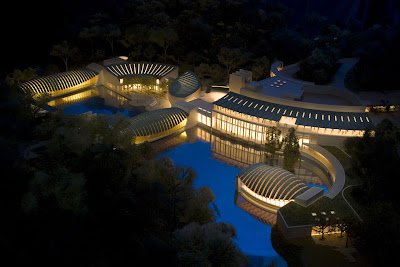 While some are calling it the Wal-Mart museum, very little of the company’s money has been given directly to the museum.  Alice Walton, the daughter of Wal-Mart founder Sam Walton, has donated $1.2 billion, yes billion, to endow the project.  In comparison the Wal-Mart Foundation, the philanthropic branch of the mighty empire, has given a trifling $20 million to ensure free admission for all.  So if you go, your ticket is in effect being picked up by the profits at your local Wal-Mart store.
Of course, Miss Alice’s massive fortune has been created solely by her stock in and relationship with the retail company.  One way or another, it’s Wal-Mart money. There is irony indeed in the notion that one of the finest collections of American art has been built by the glorification of cheap Chinese goods and at the expense of the mom-and-pop storekeepers of small-town America.
Far from art imitating life, Wilde holds that art sets the aesthetic principles by which people perceive life. What is found in life and nature is not what is really there, but is that which artists have taught people to find there, through art.
Old Oscar also wrote: “America is the only country in the world that went from barbarism to decadence without civilization in between.” While the ancient civilizations of Europe continue to struggle under their massive debt crisis, while the puritanical Germans continue to clean fastidiously, and the cantankerous French continue to quarrel endlessly, the Americans of Wal-Mart continue to prove Mr. Wilde right.  Barbarism right to decadence.
Posted by Steve de Beer