One Tiny Corner Of The Planet 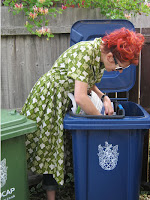 In the New York Times, you can read about famous events in history that occurred on this day. Today is August 29th 2011, the day my elder daughter started high school. On this day in history, in various years, Hurricane Katrina struck New Orleans, Michael Jackson was born, Ingrid Bergman died, and the Soviet Union exploded its first atomic bomb.

Facebook has a similar feature where you can see the exact posts you made one year ago on this day. On a level of interest that has no value at all compared to the events listed above, I did just enjoy reading what I posted a year ago - the post that perhaps generated more amusing comments from my friends than any other. I re-post it here, sort of like a re-run of your favorite M*A*S*H episode. Enjoy! 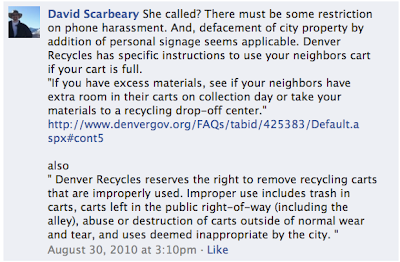 And now the last word, one year later....I never did ask for that cup of sugar, nor did I take my dog to foul her lawn. I didn't get stoned or have a toilet paper tube thrown at me, nor did I write a short story about the incident. I didn't even set her straight by quoting city rules. I decided that some battles are not worth fighting and I realized that I have more important places to spend my energy.

My neighbor and I didn't exactly kiss and make up though I did cross paths with her in the alley once before I moved out of that house. We exchanged a pleasant enough hello. I suspect that she might still be keeping watch over her bin, guarding it from illicit recyclers everywhere, an ever-present sentinel over her tiny corner of the planet.

I wish her peace on earth.
Posted by Steve de Beer

And I wish you wild amounts of recycling boundary crossings!!